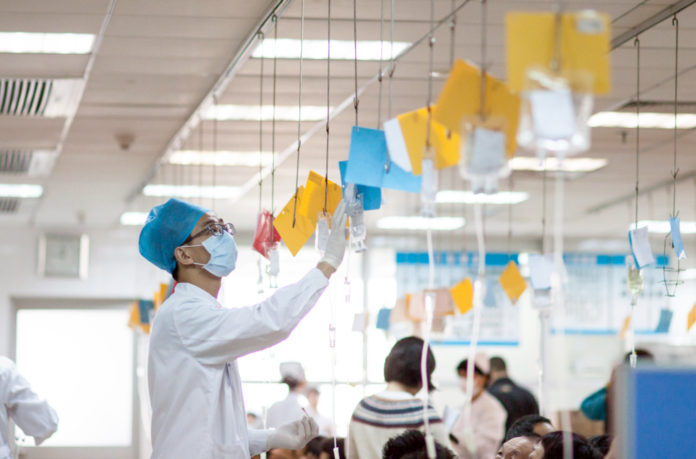 A visit to a Chinese hospital for women

Entering the lobby of a Chinese hospital is sensory overload – LED boards scrolling instructions, families simultaneously debating plans of action, and the familiar crowds clamouring at every service. Nearest the front door are Reception nurses in perky fuchsia hats and uniforms taking requests from new arrivals. I told them my purpose in halting Mandarin: mammogram; blood work; and gynaecological exam.

Three color-coded tickets were promptly issued and I was directed to the Registration and Cashier area. Above, blinked a reminder for patients to have ID cards and cash ready. The full day journey began.

Stepping up to the window, I shouted my name into the small opening, trying to be heard over the brouhaha. After paying RMB 15, I received a records book with my name ‘TRACL’, an ID card, and instructions on which floor the services were located. Each area would require queuing in the same manner: registration; pay; service.

First up was a visit to the Doctor of Internal Medicine for blood work. The physician was in an empty office reading a book at his desk. Presented with my most recent Western medical centre lab results, the doctor impressively ordered he same tests for one tenth of the cost and handed me an order form with sky-coded stickers to bring to the lab.
Efficiency and quality – this was a good start!

Next, I approached the lab department. At the far end of the room was a mob like those at the cash registers at Carrefour on Saturday mornings. Nurses with quickly filling trays of test tubes were drawing blood from patients whose arms were thrust through glass partitions, and trays of test tubes lay below. The windows were labeled as follows: Urine and Feces; Vaginal Discharge; Blood Work. Patients pushed from behind, juggling test tubes with protruding cotton swabs, eager to drop off their specimens at the correct window.

With trepidation, I lined up at Blood Work trying to discern how sterile the procedure would be. Between each patient, when not distracted by screaming children getting poked and consoled, I strained to see the action at the window: Individually wrapped needles – check; Alcohol dipped cotton balls – check; Rubber gloves – check; Changing gloves between patients – NOT! Swearing under my breath, I went over the scenarios in my mind – demand from someone about to stick a needle in my arm to break procedure or deal with the dirty gloves. I opted for psychological warfare. Using rudimentary Mandarin I sweetly stated, “My skin has allergies.” After a tight smile and sidelong glance at her colleagues, the nurse walked across the room and changed her gloves. This small victory admittedly gave me a sense of control amid the madness. Blood was drawn and had my stickers were attatched to the test tubes. I was instructed to return in a week and scan the remaining stickers under the likeness of a Delta ticketless check-in stand for my results.

Next I located the gynaecologist area and perused the signs for where to go: Maternity, Menopause, Hygiene; and Little Son Gynecology?! Each office had a similar scene – patients placed their records on the desk in order of arrival and hovered until their turn. there is no way to have a private conversation with the doctor. The examination table, located behind a cubicle was covered with a stained towel, so the nurse placed clean white paper on the lower half. I pleaded with her to cover the top half also. The only place for clothes was the floor. I wadded them into a ball and balanced them precariously on my sandals. Appreciative that the speculums were wrapped in plastic, I spread my legs to the doctor’s mercy. Three swabs later and with no time for small talk, it was over. The doctor handed me the samples and I joined the other test tube carrying subjects waiting in the Vaginal Discharge line.

Finally, the visit to the Breast Inspection area – it was pleasantly surprising. Ultrasounds are performed to eliminate exposing a woman’s breasts to the radiation from a mammogram. Results were immediate and I delivered them to the gynaecologist who thoroughly compiled and reviewed the day’s test with me.

Overlooking the unsanitary conditions and opportunities for error with patients ferrying around their own specimens, the system is well-suited for handling large crowds in the most efficient manner possible. No appointment is necessary, every service is located under one roof, and if you get up early you can beat the crowd. If I didn’t have private medical insurance already, I would definitely get insured after my first experience of a local Chinese public hospital.

Regardless of cultural background, there is one given in healthcare: pregnant women want to know what they can do to improve the likelihood of...

8 Questions About Childbirth in China